Wallenberg - The arms dealing heroin financing scum of the earth

Posted on March 27, 2011 by wallenbergfraud
The Swedish Wallenberg family has managed to fool the world to believe that Raoul Wallenberg was saving lives during second world war. Raoul Wallenberg was only doing the same thing his brothers and sisters was and still are doing… killing and robbing poor people.
The Wallenberg´s are involved in weapon sales, Afghan heroin trade and many of the so called help organisations like UNICEF, RED CROSS, SIDA, UNITED NATIONS etc etc.
The Swedish king Carl XVI Gustaf Bernadotte and his nazi family are also working for the Wallenberg´s. It´s all about weapon sales, robbing Africa, Iraq, Afghanistan… and the narcotics trade.

The Swedish government and Wallenberg family sold weapons to Burma Army and Burma army paid with money from heroin trade.

Not by coincidence, everything that Bildt and Reinfeldt have done in office has benefited Sweden’s Wallenberg family. Renowned bankers, industrialists, politicians, diplomats and philanthropists, Sweden’s Wallenbergs maintain a very low-key public profile. Still, a Swedish hedge fund manager was quoted as saying, “They are a bit like royalty.” The Wallenberg business empire is a large group of companies in which its investment company, INVESTOR AB, or Foundation Asset Management company, FAM, holds a controlling interest. By the late 1990s the Wallenbergs controlled some 40% of the value of companies listed on the Swedish stock exchange.
In the twenty-first century, the fifth generation of Wallenbergs took over family operations: Marcus, Jacob, and Peter.  A product of Philadelphia’s Wharton School, Jacob Wallenberg is Chairman of the Board of Investor, and Vice-Chairman of SEB (Skandinaviska Enskilda Banken, founded by a Wallenberg ancestor). He also serves on the boards of Atlas Copco AB (Vice Chairman), SAS AB (Vice Chairman) and ABB. The largest single stake in ABB is held by Investor AB. Headquartered in Zurich, ABB  is one of the largest conglomerates in the world, a global leader in power and automation technologies, and the world’s largest builder of electricity grids.
NOTE – ABB also has a long laundry list of criminal prosecutions by the US Depart of Justice (DOJ)  http://searchjustice.usdoj.gov/search?q=ABB&btnG.x=0&btnG.y=0&btnG=Search&sort=date:D:L:d1&output=xml_no_dtd&ie=iso-8859-1&oe=UTF-8&client=default_frontend&proxystylesheet=default_frontend&site=default_collection
What is not widely understood, outside of Sweden, is that INVESTORS ABhttp://www.abb.com industrial sector is creating some of the world’s most deadly war machines, e.g., Saab’s Gripen NG fighter jet with AESA radar.  The Gripen was the subject of leaked U.S. Embassy-Stockholm cables, which revealed that the U.S., while pretending to help Saab get  AESA radar capabilities to sell Gripen fighter jets to Norway, was actually helping Boeing get the contracts. While costing the Wallenbergs’/Investor’s Saab a great deal of money, the U.S. did eventually facilitate General Electric and Honeywell entering into a partnership to equip the Gripen with AESA radar.
In 2000, ABB signed a contract for the delivery of equipment and services for two North Korean nuclear power plants, to be supplied under an agreement with the Korean Peninsula Energy Development Organization (KEDO). Donald Rumsfeld, a board member of ABB at the time, helped in the delivery of the nuclear power plants to North Korea (seehttp://thinkprogress.org/2006/10/10/rumsfeld-abb/ )

“Neutral” Sweden, on the other hand, made little attempt to hide its pro-fascist position during the War. The strong and profitable connections of Swedish business circles with the Nazis were well known to the Allies who were no doubt persuaded against taking punitive action by those same “certain interests” that Russell Nixon referred to.
Among the Swedish companies that grew rich by aiding the Nazis was the Enskilda bank, owned by the Wallenberg family. The Safehaven documents reveal that the US government had been tracking the pro-Nazi activities of the Wallenberg brothers, Marcus and Jacob, for some time.
In February of 1945, the Secretary of the US Treasury, Henry Morgenthau Jr., wrote to Secretary of State Edward Stettinius outlining the Wallenbergs’ activities.
These included making “substantial” loans to German industry during the War without collateral and making covert investments for German capitalists in US industries. The Enskilda bank, Morgenthau reported, was “repeatedly connected with large black market operations”.
Morgenthau identifies Jacob Wallenberg as “strongly pro-German” and rebuts the view, probably fostered by Wallenberg interests themselves, that Marcus was “pro-Allied”.
Helping to finance Hitler’s war, the Wallenbergs seem to have been playing both ends against the middle, with considerable success. The family remains prominent in Swedish business circles to this day.
Playing both ends against the middle seems to have been a Wallenberg specialty. While his family’s bank was funding Hitler and helping to hide Nazi investments, Marcus and Jacob’s nephew Raoul Wallenberg, a Swedish diplomat in Budapest, was saving an estimated 20,000 Jews from deportation by SELLING them special Swedish passports.

RAOUL WALLENBERG SOLD PASSPORTS, HE HELPED ONLY HIS WALLET. RAOUL WAS WORKING IN A BANK IN ISRAEL WHEN HE GOT THE IDEA TO SELL PASSPORTS TO JEWS THAT NEEDED TO GET OUT OF HUNGARY. HE WAS A STONE COLD CRIMINAL JUST LIKE ALL THE REST OF THE SCUMBAGS IN THE WALLENBERG FAMILY. 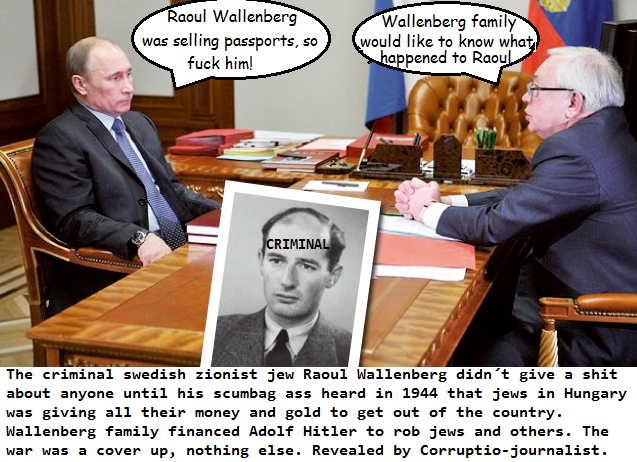 Search on Google about Edvard Sachse Coburg Gotha, that nazi pedophile is the grandfather of the heroin and arms dealing king of Sweden, Carl Gustaf Bernadotte. Both Wallenberg and Bernadotte financed Adolf Hitler.